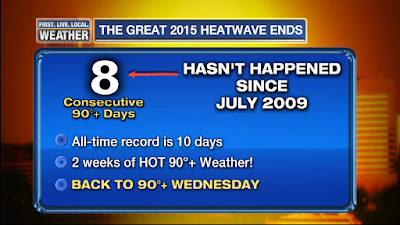 Didn't take long before our non-air-conditioned house was put to the test.

For days it performed very well.  Inside, it felt like it was air conditioned.  A visitor refused to believe me when told we had none.

As the heat wave dragged on, however, the evenings stopped cooling down at night. Flushing the house at night didn't shed much heat.

The thermal mass of the floor slab stayed cool for days, but eventually the reserve dwindled since it was no longer recharged at night with cool air.

Still, at the worst of it, the house got up to the low 80's inside - warm for sure, but doable to sleep with a fan.  Bordering on uncomfortable, but considering this was a "record setting" heat wave, we shouldn't expect this to be a very regular occurrence.

Today it reached 90 again, but since last night was a more typical Oregon cool summer night the interior stayed nicely cool all day.

So what are the principles at work here?

1.  Insulation:  Delays the transfer of heat.  The more insulation, the longer it takes for the heat to penetrate.  The idea is to delay it long enough that conditions can change before the heat gets through.

2.  Air tightness:  Air will transfer heat (and moisture) fairly well.  It renders your insulation rather pointless if air is flowing through.

3. Sun shading:  If you can keep the sun off of your walls and windows, you severely cut back on the amount of heat gain.  "Passive Solar Design"

4. Thermal mass:  An object with high mass (like a concrete slab) takes a lot of energy to warm up, or conversely cool down.  It resists change, in a nutshell.  The idea is to give it as much as possible of the input you want it to have (cool air in the summer), and as little of that you do not want (see sun shading, air tightness, etc. to keep heat away).
Cool it at night, it stays cool all day as long as you protect it (isolated from the exterior - very important).

5. Sailing the House:  A term for manipulating the controls on your house for desired results.
During the day, button it up.  Close all windows and doors, and keep it that way all day.  Resist the urge to open a window; you have plenty of fresh air from your HRV.
In the evening when the temp drops to equal or less than that of the interior, open the house up and let the cool air inside to flush the heat out of the walls and slab.  More air flow the better - think cross ventilation. Open that skylight for good stack effect.
That's it - open and close at the right times.

Keep the heat out, then flush the heat that got in.
This goes a long way.  In a climate like Portland's, it is pretty much all you need.
Posted by Hunter Williams at 10:53 PM